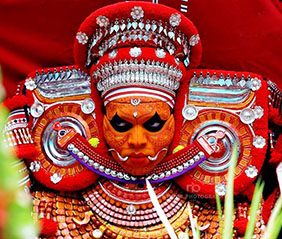 The earliest historical evidences shows that the peoples resided in Malanad (North Malabar) were ancient hill tribes. Their culture and tradition have been upheld by both the tribes and the peasantry. They practiced a democracy in their organization and developed certain cultures based on particular deities and sthanas of their own. A fascinating yet complex, development took place with the coming of the Aryans and with the non-Brahmanic communities in the south of India getting exposed to new beliefs and precepts the Aryans introduced. The nascent cultural fabrics of the little developed communities came to take on hues of the richer Brahmanic tradition. The diffusion of Brahmanic culture brought out classical and puranic Hindu Gods and Goddesses where the primitive form of Theyyam had continued among the people. It was followed by the introduction of Brahmanical temples and accumulation of land property by the custodians of temples. The beginning of a new social formation rooted in a class character of land owners and laborers established a new social system. The property holders and land owners appreciated the Brahmanical culture and practice related to temples where the landless laborers and artisans practiced the indigenous cults and non-Brahmanical rituals and it was the beginning of the caste system in the area. The landed class wanted an ideological reconciliation with the lower class by imposing their own Gods and Goddesses on the religious system of the small communities. The reason for this development was to avert a direct class conflict and also a caste conflict between these two classes of masters and serfs. With this ultimate object, theyyam deities were made subordinate to the temple deities. According to Brahmanical ritualism, the temple worship was established, since the caste hierarchy was so rigid, the lower castes were forbidden from entering temples and worshipping the Aryan Gods. So for their religious activities and rituals they constructed small shrines and they performed the embodiment image of God as Theyyam in their shrines. The caste like Thiyya, Vaniya, Maniyani, Kammalar etc. have their own shrines and deities and yearly they conduct ‘Theyyam Kaliyatam’ to appease the God. The castes who perform the Theyyakolam are Peruvannan, Perumalayan, Panan, Anjootan, Munnootan, Kalanadikal, Mavilan, Kappalan, Nalkithaya, Thulumalayala Velan, and Pulayar. They are generally called ‘Theyyakaran’.