The Nature of “Theyyam” 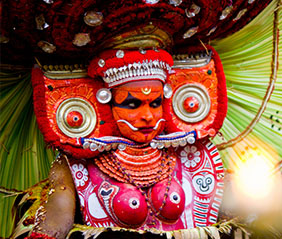 Etymologically “Theyyam” means God in Malayalam. Theyyam is not temple oriented but it is performed in “Sthanas” ( Kavu, Kottam ) and “Tharavadu”. Kavu, Thanam, (Sthanam), Mundya, Ara, Palliyara, Kottam are different devine places in which theyyams are performing. More over it is generally performed in open paddy fields, in the courtyards of Tharavadu or ancestral houses and sacred groves. They are performed annually from October to June -the months of harvest. The “Kavus” of worship are decorated with sculptures made of wood are very different in nature when compared to the other Indian Hindu Temples.Quite often God may be represented by a sword, carved stones, a stool,a piece of wood or mask.The traditional performers wearing exotic dresses involve in ritualistic dances.Malyan, Vannan, Munnutan, Anjuttan, Velan,Koppala,Chingathan,Mavilan and Karimbalan are the castes entitled to perform tbem. Except in one place ( Devakkooth, see Dec 20th theyyam calendar, in Thekkumbad Koolom Kavu “Lady Theyyam” ) generally the performers are men.

Theyyam or Theyyatom is one of the oldest indigenous and mystic ritual art form of North Kerala particularly now found in the traditional Kolathunadu of the present Kannur and Kasargod District. As a living cult with century old traditions, rituals and customs, it embraces almost all castes and classes of Hindu religion. Its root can be traced back to 1500 years ago, and still preserve its Tribal and Dravidian features although the art form has evolved over centuries to form what can be called an amalgam of religious and spiritual traditions. More than 450 theyyam forms depicting various deities exist in this cult that has become the cultural symbol of North Kerala.

The indigenous Theyyam cult under the influence of the great classical Indian tradition incorporated new ideals and legends. However its form and content did not change very much. Kerala history describes that Parasu Rama sanctioned the festival like Kaliyattam to the people of Kerala. Kaliyattam means Theyyattam or Daivattam, which lasts for 3 to 11 days. He assigned the responsibility of Theyyam dance to the indigenous communities like Panan, Velan, Vannan and Malayan. The dance performed by these communities are essentially with regard to the established deities such as Bhagavthi, and Vishnu. Other performers are Mavilan, Vattuvan, Pulayan, Anjuttan, Munnutan, Chingathan, Karimpalan and Koppalan. Velan one of the communities of Theyyam dancers are referred to in the Tamil Sangam Lliterature. According to sangam traditions, he was employed by the mothers of love born girls to exercise the malignant spirits from their daughters. He propitiated God Murugan to drive away the evil spirit by sacrificing animals. The ceremony is a kind of dance with a spear in his hand and he prophesied the future happenings. Such tradition are also found in the present theyyam cult. Later on Velan community is divided in to two prominent theyyam dancer groups Anjutton and Munnuton. The dance of Velan had taken new forms and developed in to the present day cult of Theyyam over a period of more than 1500 years. The uninterrupted continuity of the Sangam tradition makes theyyam a prominent religious system of North Kerala.

The history narrates different facts regarding the origin of theyyam cult. The North Malabar was an under developed area with two distinct places, Malanad and Tulunad (Malabar and Kasargod) and the inhabitants were indigenous tribal communities. They had their distinct culture and adore their own deities and the custom of ritual performed by them was quiet different from traditional Hindu custom. It was purely ritualistic incorporated with music, dance and colour. The practices like spirit worship, ancestor worship, hero worship, masathi worship, tree worship, animal worship, serpent worship, the worship of the Goddesses of the disease and the worship of village deity are included in their main stream of practice. They sacrificed animals, birds and even humans to propitiate their deities. There were no permanent buildings for performing such a function instead they did conduct it in open places, in the clearings, and in the allotted sacred places. The major communities existed in the areas were Velan, Malayan, Vannan, Mavilan, Valluvan Koppalan etc.

Slowly the demographic and social changes had taken place in the area mainly due to the settlement of different immigrants who migrated from other parts of south India. The prominent groups were Brahmins and Non Brahmins. The arrival of these groups made lot of changes and social reforms and it caused people became divided on the basis of caste and community. The Brahminic communities had their traditional believes and followed purely the Classical Indian tradition and Hindu mythology. As a result their tradition also had the effect in the theyyam cult such as Shaktism, Vaishavism, and Shaivism. In several occasion blood offering is also seen, despite being forbidden in Hinduism, Jainism and Buddism. Later on this group had a religious supremacy over others and ruled the kingdom as Chieftain land lords. They started to construct temples and placed their own deities and denied entry for the lower class people. Though there were no violent confrontations between these two cultures the higher class gradually recognized the indigenous tradition of the lower class. The feudal Chieftains allowed them to construct wooded groves, thatched sheds and allotted few open places as an encouragement to promote the lower strata’s culture. They started to construct small shrines through out the rural areas and there were no idols of gods instead they placed a sword, or a stone as a symbolic presence of the divine. Slowly the whole area skipped their orthodox nature and people began to move to these shrines and started to worship different deities irrespective of caste and community. It was an interesting process how the social inequality and degradation inverted during the function. The theyyam cult has got much attention as it was such a profound ritual art with utmost fervor and supreme ardor with the effect of Godliness.